Our countdown of the best St. Louis Cardinals players since the year 2000 continues with a look at first base. A position that was dominated by one man for the majority of the 2000s, but that doesn’t mean there wasn’t plenty of debate to be had among the 2 and 3 spot.

Again each voter picked 3 players with their 1st player receiving 3 points, 2nd receiving 2 points, and 3rd receiving 1 point. And Jason and David made their own rules and split their final vote among two people. So far we’ve had:

Catch more breakdown of first base in podcast form on Game 035: I Find Your Lack of Faith…Totally Appropriate of The PineCast. 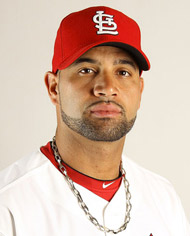 Jason’s Take (3) – Not a lot to argue here. Pujols had one of the best 11 year spans in the history of Major League Baseball. And to think it might have been delayed1 had Bobby Bonilla not injured himself in Spring Training. And while that wasn’t the only reason Pujols made the roster, it definitely helped open the door a little farther. After that point he just had 1,329 RBIs, 445 HRs, and slashed .328 / .420 / .617. With a not too shabby 86.4 WAR over those 11 seasons.

Tim’s Take (3) – Obvious choice here. 10 time all-star and 3 MVP awards in 11 seasons with the team. #5 will be hanging with the retired numbers at Busch in a few years.

David’s Take (3) – Hard to pick against arguably one of the best, if not the best when it’s all said and done, first basemen in baseball history. Pujols is second in franchise history in home runs, RBIs, doubles, total bases, and probably top ten in all the other ones minus steals for obvious reasons. No more hard feelings, Albert… we’re cool. 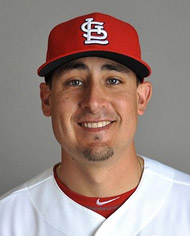 Tim’s Take (2) – While his actual position can be debated, since he played all over the field during his time in St. Louis, he played 217 games at first in his four-and-a-half years with the Cardinals, so I’m counting it. Before tailing off in 2014, Craig was an enormous threat in the line-up from 2011-2013. He had .291 average during his time in St. Louis. He had some memorable playoff moments as well, hitting 5 home runs in 34 playoff games, including 3 home runs and 5 RBI in the 2011 World Series.

Jason’s Take (2) – When looking at first base for the Cardinals in the 2000s everyone else to pick from is a pretty small sample size. And before Craig fell off the map after the 2013 World Series he put up some excellent numbers in 182 games at first base in 2012 and 2013. In those games as a first baseman The Craigerator hit 23 HRs, drove in 130 RBIs. and tacked on 43 doubles while hitting .304 and .294 respectively. Plus he came in and helped deliver the 2011 World Series hitting 3 bombs2.

David’s Take (2) –  Career .279 hitter so far in 4 seasons without actually playing any full season. If he gets enough playing time, he’s got the potential to be something in my book. Tough to hate against that Kershaw bomb in the NLCS too.

Steve’s Take (1) – Matt makes the list because he’s had some clutch bombs in his first few years as the Bird’s first baseman. He definitely needs to pick up the power numbers or else he could be on his way to losing playing time to someone else (Stephen Piscotty?).

Jason’s Take (0.5) – McGwire gets the honorable mention in my book, mostly because I’m still waiting for someone else to step up consistently in the 2000s outside of Pujols. Even though he battled injures in 2000 and 2001 he still put up 61 HRs and 137 RBIs. And one of those seasons he hit .187 but still had 29 HRs and 64 RBIs. Gotta love the live ball3 era.

Former AAA Clubbie. Will Clark once tried to intimidate me over pizza. Known to pack wet clothes for crap tippers. Expert in keeping the spread warm, buying Hawaiian Punch 2 litres & looking the other way.

David’s Take (0.5) – Tino added to his consecutive seasons with a grand slam record while in a Birds uniform.