We’re on to number 4 on the GFSTOAT. It pains me, deeply, to put this team so low, but the grades just worked out that way, and we’re nothing if not unbiased1 here at View From The Pine. Let’s do a quick recap: at number 5 we had the Keanu Reeves led Washington Sentinels from the classic film The Replacements. Now at number 4 we’ve got: 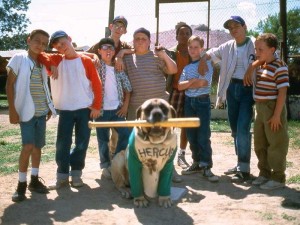 You’ve got Scotty Smalls, Hamilton “Ham” Porter, Michael “Squints” Palledorous, Alan “Yeah-Yeah”, Tommy “Repeat” Simmons, and Kenny DeNunez. But really the key player conversation for The Sandlot begins and ends with Benny “The Jet” Rodriguez. The kid outran Hercules to save a ball signed by “The Babe”, and respected his competition enough to help lift a fence off of the beast after he bested the dog. Plus he’s got the skills to hit a fly ball directly into his nerdy neighbors outstretched glove to make it appear he can play ball. DeNunez isn’t bad either.

Despite a strong nickname game2, there’s not much depth to the Sandlot crew. They had to scrape the bottom of the barrel with Smalls to field a full 9. Your always a Vietnam draft or a strip mall opening away from a full squad.

The closest this team had to a coach was “The Jet”. Who was really a player coach. And he was able to squeeze every ounce of talent out of kids like Scotty Smalls3 and Squints. Not to mention he was visited by the ghost of Babe Ruth.

Then you’ve got “Ham” Porter out there in the Molina role calling pitches for DeNunez while simultaneously distracting opponents with jokes about their sisters. Plus he’s not afraid to get in a ferocious dust-up with the opponents top player.

They never played a real game, but they did beat the shit out of some preppy kids on bikes that were talking all kinds of garbage. The crew also had one player reach the majors in Benny “The Jet” Rodriguez. Oh, and Squints did knock up Wendy. So bonus points for playing above his league.

One of the greatest baseball movies of all time, but did have one or two direct to DVD sequels that couldn’t quite live up to the original crew.