The St. Louis Cardinals 2016 season is over much earlier than it has been in the last 6 years. For the first time since 2010 St. Louis baseball fans have no rooting interest headed into the MLB playoffs. That leaves a pretty big hole to fill during October baseball. And there’s no clear cut team to pick

Let’s break down the teams remaining in the hunt for the World Series.

Cardinals Ties: The Orioles are the Cardinals of the AL. Except they’re even more reliant on the long-ball than the 2016 version of the Cardinals. And their starting pitchers aren’t exactly world beaters. You’ve got Chris Tillman starting the wild card game with a 3.77 ERA.

Why to Watch: The Orioles could provide some fun, offensive focused baseball in October. Buck Showalter is great manager and once appeared in an episode of Seinfeld. They’ve also got the best closer in baseball,

The Score: They’ve been making the playoffs quite a bit the last few years, but never seem to get past the Division Series. You would think they’d draw better attendance during a tight Wild Card race where teams were actually winning their way in, instead of losing their way in like the NL Wild Card race. Minus the last 4 games of the season. They’ve got some high-powered offense potential that could make them spoilers. They could also get bounced in the Wild Card game.

Cardinals Ties: They took Colby Rasmus off the Cardinals hands in 2011 and gave them a couple relievers that would help lead the Cardinals to the 2011 World Series.

Why to Watch: The Rogers Centre1 can get up for some playoff baseball. Meanwhile Jose Bautista, he of the Sharpied on beard, has become one of the most hated players in baseball for his astronomical bat flip last year. Which has also led to way too many think pieces being written on the topic of bat flips. So that’s a strike against.

The Score: What the hell Canada? I thought you guys were super polite. Throwing beer at outfielders. That’s some Philadelpha-level stuff. Downgraded.

Cardinals Ties: In even numbered years the Giants have been the downfall of the Cardinals. Eliminating them in the NLCS in 2012 and 2014. And now eliminating them from the playoffs on the final day of the season in 2016.

Why to Watch: The Giants had the best record in baseball going into the All-Star break. And were only the Minnesota Twins away from having the worst record in baseball after the All-Star break. Luckily for them, the Dodgers mailed in their final series in San Francisco giving the Giants 3 games to take extra batting and fielding practice. Allowing them to right themselves for another even-year playoff run. They’ve got Madison Bumgarner lined up to start the Wild Card game on the road. He’s posted a 0.60 ERA on the road in the postseason. Meanwhile, Hunter Pence’s species blew up Elon Musk’s Falcon 9 rocket.

The Score: Hard pass. Not only do they seem to give the Cardinals fits in postseason baseball, but they’ve got notoriously kicky pitcher Johnny Cueto as their number 2 starter. And their ace Madison Bumgarner tends to overreact if you glance in his general direction after a flyout.

Why to Watch: Just over a month ago the mets seemed like they had no business making the playoffs. They were losing starters left and right (Jacob DeGrom, Stephen Matz, Matt Harvey). But as long as you have Bartolo Colon things can’t be all bad. And the Mets were able to take the top Wild Card spot in the NL and have their remaining ace lined up to pitch in Noah Syndergaard. Plus Yoenis Cespedes could at any time decide a ball sitting on the field is unplayable.

The Score: There just isn’t a lot to like about the National League playoff teams. The Mets at least swept the Chicago Cubs out of the playoffs last year. Bonus points for that.

Cardinals Ties: The Indians seem to be the only team in baseball capable of fleecing the Cardinals on trades repeatedly. In back to back year the Cardinals gave up prospects to land Justin Masterson and Brandon Moss. Moss wasn’t a complete bust, but he did have a historically bad month of September right in the middle of a playoff race.

Why to Watch: The Indians could be without their ace Corey Kluber in the Division Series, but he is listed as day-to-day. That’s unfortunate because it’s always fun to see a guy the casual fans haven’t heard of2 come in and dominate in the playoffs. The Indians haven’t won the World Series since 1948. And they haven’t been there since losing game 7 to Edgar Renteria and the Marlins in the 1997.

They’re also the only chance to continue the Year of Cleveland. Because we all know the Browns aren’t making a run to the Super Bowl any time soon.

The Score: I’ve got family up in Ohio. I’m rooting for Cleveland to pull out the improbable World Series Championship run this year. There’s really no reason I can think of to legitimately hate on the Indians.

Why to Watch: The Rangers came out of nowhere last year and made a trade for Cole Hamels that surprised everyone. The only explanation was they were loading up for this year. Then they went off and won a bunch of games and made the playoffs. Prince Fielder also had a bounce back year last year which made it that more painful to see him have to retire from baseball due to recurring neck injuries. Despite his time in Milwaukee I’d still get the feels if Fielder were able to get a ring this season.

The Score: Just watching Elvis Andrus mess with Adrian Beltre in the dugout and on the field is enough to make this team watchable. Plus after how the Cardinals crushed their hopes and dreams in 2011, maybe we Cardinals fans owe them this one. There’s also the chance that Rougned Odor punches Jose Bautista in the face again. Fun!

Cardinals Ties: They’ve beat the Cardinals twice in the World Series in the last 12 years. They also stole David Price out from under the Cardinals while he was golfing last winter. You’ve got to imagine Price is worth 2 more wins than the Cardinals fallback option, Mike Leake. But at least they called up Joe Kelly in September and used him out of the bullpen where he’s given up 1 run in 14 innings. Meanwhile Allen Craig was removed from their 40 man roster.

Why to Watch: David Ortiz is putting up huge numbers in his final season. He’s batting .315 with 38 homers and 127 RBIs. The Red Sox do have some exciting young players in Mookie Betts and Jackie Bradley Jr.

The Score: David Ortiz’s retirement party isn’t enough to make me forget Jimmy Fallon and Drew Barrymore running around on the field of Busch Stadium in 2004 for the god-awful movie Fever Pitch.

Cardinals Ties: They were once knocked out of the playoffs by Pete Kozma and Daniel Descalso. And Max Scherzer is from Missouri. So that’s neat. 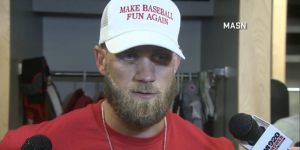 Why to Watch: Bryce Harper followed up his 2015 MVP campaign by making baseball fun again to the tune of a .243 average with 24 homers and 86 RBIs. Strasburg is out again. Leaving the Nationals to fall back to a guy named Tanner (Roark) as their number 2.

The Score: The Nationals have no hype outside of Washington going into the playoffs. They’ve also got to match up their ace against the best pitcher in baseball in Clayton Kershaw. They could get rolled in the Division Series. But if they don’t there is the possibility Daniel Murphy could ruin the Cubs season again. And at least they aren’t the Cubs, Giants, or Dodgers.

Cardinals Ties: Fortunately for the Dodgers and Clayton Kershaw their kryptonite (The Birds) didn’t make the playoffs this season. Partially because the Dodgers just rolled over against the Giants in the final weekend.

Why to Watch: Clayton Kershaw could finally be the pitcher he is during the regular season in the postseason because he doesn’t have to face the St. Louis Cardinals. They’ve also got some young talent. They are, however, the Dodgers.

The Score: If the Giants win the World Series again, the Dodgers are to blame for getting them hot right before the playoffs. I can already see the Giants taking them down in the NLCS. But to make the World Series they’ll have to knock off either the Cubs or the Giants so that’s worth a little rooting.

Why to Watch: Mostly to hope they lose.