The Rams are gone and I’m taking suitors for a new team. So far, we’ve contemplated staying a Rams fan and crossing to the darkside with the Patriots.

This weekend, I laid motionless on my couch, phone propped on my gut, watching my fantasy team get beaten again (0-3 baby!) and thought about which team I should watch. I landed on the NY Giants since their game with the Redskins happened to be on Redzone the most and the remote was just out of reach. So let’s do this.

There’s something about Eli that I really like. The guy is dull, but not too dull. He shows a glimpse every now and then of that Manning wit that gets Peyton paid by Nationwide, Papa John’s, DirecTV, Doritos, Coca Cola, MasterCard, and now I’m just naming things in the room… Anyway, Eli seems like a swell dude and he’s a two-time Super Bowl champ. There are worse dudes to root for.

ODB is easily of the biggest stars in the league. He frequently makes highlight reel catches, has sweet hair and he was the latest person to get a Lena Dunham apology, so he’s already venturing into Hollywood! This guy is a fun player to watch, and after watching the Rams’ wideouts the past decade, that’s a nice change of pace.

Gotta feel for Cruz. After not playing since 2014, he’s back. Almost two full years after he caught his last pass. I’m a sucker for the comeback story. The world is a better place with Cruz dancing in it.

Speaking of comebacks. Gotta feel for JPP too. We’ve all been in his position. Drinking brewskies, blowing shit up, showing off for your buds. Most of us just get lucky enough to not blow ourselves up. Also, good on him for that fireworks PSA to remind us maybe to not buy those M80s we were thinking about.

Who the hell is coaching the Giants now? Oh yeah, that guy. 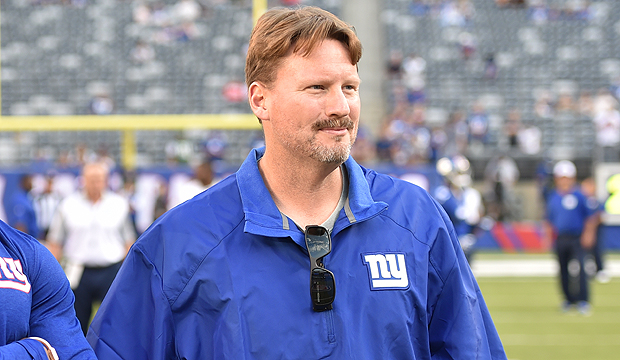 I do like seeing teams promote from within the organization. Usually is a sign that they know what they’re doing to some extent and guys want to stay there.

John Mara is one of the most respected owners in the league, and was part of the committee that may or may not have tried to help keep the Rams in St. Louis. Anyway, he’s alright in my book.

I kinda like New York sports fans. As a STL Cardinals fan, I can relate to them a bit more. I always disliked the Yankees, and now I kind of get it, since the Birds are one of the most hated teams and fanbases in the MLB. I’ve been to games at Citi Field and Yankees stadium and thought the fans were funny, knowledgeable and pretty cool, in between making fun of the Mets.

This ended up being a helluva division game. The Redskins were coming in 0-2 and the Giants 2-0 and it had a good storyline to follow with the ODB and Josh Norman rematch.

ODB looked like he won the rematch on the stat sheet with over 120 yards and burned Norman a few times, even though he didn’t get in the endzone. However, he lost the match with the kicking net.

In the end, the Giants finished the game with a ton of back breaking mental mistakes and penalties (something I’m familiar with!) and lost a game they should have won. It was still entertaining though.

The Giants bandwagon may have lost a bit of steam in the past couple of years, but they’ve won two Super Bowls in the last 8 years. Oh yeah, and they beat the Patriots both times. So I’ve actually pulled for the Giants in big games more than that other team that played locally. I remember about as many big plays as the two Rams Super Bowls too. The helmet catch, So, hell yeah, these guys are good in my book.

Once again, we take all of the scores above and run them through our proprietary methodology. Then, we entrust the sealed ballots  to the auditors of Ernst & Young before revealing the result below.

The best score we’ve had so far! Beating the Patriots a few times definitely gives them an edge above others.