We’re down to number 1 on the Greatest Fictional Sports Team of All-Time list, but before the big reveal let’s go over the rules. Each team in the GFSTOAT list is graded on a scale of 1 to 5 in 5 key categories: key players, depth, coaching, results, and legacy. So far we’ve had:

This wasn’t really even a competition with the Springfield Nuclear Power Plant Softball Team blowing the other competitors out of the water. They can add the GFSTOAT trophy right next to that 1992 City Champs trophy on the mantle. 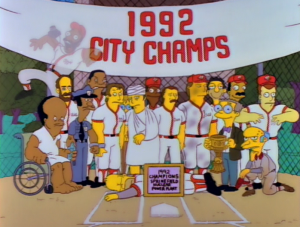 This team is a who’s who of early 90s MLB players. Meaning it’s Hall of Famers and drug users. Sometimes both. You’ve got Ozzie, Griffey, Mattingly, Boggs, Clemens, Canseco and the list keeps going. Not to mention the man that got them there, Homer Simpson, has a magic bat carved from a tree limb that was struck by lightning.

See above. This team is stacked. And if in the unlikely event that all those ringers are incapacitated through various misfortunes such as gigantism, radiation poisoning, or a bar fight over who is the greatest prime minister, Pitt the Elder or Lord Palmerston, you’ve got Lenny and Carl ready to fill in off the bench. And Homer with the aforementioned Wonderbat.

While diabolical, Mr. Burns didn’t do a good job of managing all the egos inherent with an all-star lineup like this squad. He did have the vision to bring them together. Makes you wonder where Pat Riley got the idea in Miami.

This team overcame a 2-28 record from the previous year and a series of misfortunes befalling their best players, and still managed to pull off the championship victory against Shelbyville. Even if it was a walk off hit by pitch to squeak out the 44-43 win.

Up there as one of the greatest episodes of The Simpsons. There is also some pretty great stories about the making such as Ken Griffey Jr. not understanding the line “there’s a party in my mouth and everyone’s invited”. The episode has also been credited with saving at least two lives. Not to mention the song.

This softball league has some of the best rules I’ve heard. You can’t leave first till you chug a beer. Everyman scoring has to chug a beer. You have to chug a beer at the top of all odd numbered innings. And 4th inning is the beer inning.