We know this is a tough decision, and that’s why we’ve put together this helpful guide so you can pick a new team from the 28 teams left out there once you remove the Rams and the Cleveland Browns from contention. Because no one is willingly rooting for the Browns. Not even Lebron.

The Packers are my personal choice and not just because Aaron Rodgers has personally carried my fantasy team to the Championship multiple times. They’ve been my fallback playoff team since the Rams forgot the playoffs were a thing after 2004. In that same span the Packers have only missed the playoffs in 2005, 2006, and 2008.

The playoff track record is there, and on top of that they played in some of the most exciting games last season as Rodgers showed a knack for hitting game winning or game tying last second hail marys.

They’ll likely continue to be an exciting passing attack with Jordy Nelson returning from injury. And the Vikings should give them some competition for the division title in the NFC North making for an interesting race.

Speaking of the Vikings, they should be good again this year with a stout running game, a solid defense, and a passable quarterback. Three phases of the game the Rams have only been able to manage 2 of for the past 12 years.

Plus the NFL just bilked Minnesota out of millions of dollars to finance a new stadium by dangling the fear of L.A. over them. A move they won’t be able to pull again…until they do it to the Chargers and Raiders again this offseason. But then not again…until they start hanging London over some poor city’s head.

So there’s at least some solidarity in the fan bases knowing the NFL is run by a bunch of greedy old pricks.

Staying in the NFC North, the NFL is also forcing Bears broadcasts on the St. Louis market. If you just want a team you can easily follow without buying NFL Sunday Ticket or Red Zone. Then the Bears could be the team for your. There’s always the option of getting drunk on a train to Chicago for a 3 PM game too. 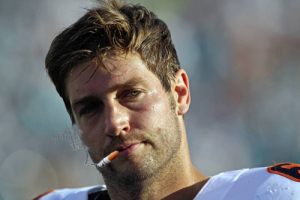 As far as personnel goes the discussion starts and stops with Jay Cutty. Cutler led my fantasy team to my latest fantasy championship two years ago. Despite being benched for a good portion of the playoff push. He’s that kind of player that hangs around in the fantasy draft while all of the other good quarterbacks have already been taken and you’re just stockpiling trade bait receivers and running backs. Until it finally gets to about round 12 and you still need a QB. And you decide, “Screw it. Give me Cutler.” Which is kind of how the Bears ended up with him too.

With Matt Forte gone the Bears will look to Jeremy Langford in the running game and Alshon Jeffrey and Kevin White in the passing game. Do they have a defense? I don’t know. They’ve been irrelevant for awhile. But hey, Brian Urlacher has hair now. 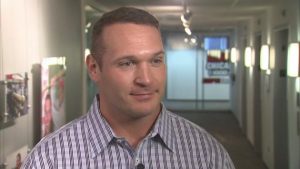 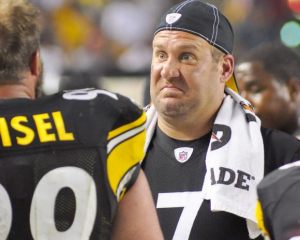 The Steelers are a team that has been good forever. And they’ve already got fans spread out all across the United States with St. Louis being no exception. If you’re looking for a team you can root for and have an excuse to go to a team bar and get drunk at 12 on a Sunday this may be the team for you.

You’ve also got the anti-Kroenke ownership. The Rooney’s have owned the Steelers forever and they’ve had something crazy like 3 head coaches since 1969. Which is ridiculous given the turnover among NFL head coaches.

Oh and they’ll likely be good again this year as they battle with the Bengals for the NFC North crown. Barring a Ravens or Browns (JKs) surprise turn around.

They should have a pretty solid offense this season too. With Antonio Brown being one of the best, if not the best, player in the NFL. They’ll have to wait a few weeks to add Le’veon Bell to the mix though, but when they do this offense should really fly.

If proximity is your thing the Chiefs are just across the state. And, despite the thinking of most NFL fans outside of Missouri, they are in the same state as St. Louis. Arrowhead is suppose to be an amazing fan experience for a game too. Something even the most diehard St. Louis fan couldn’t have said about trekking down to the Dome on a Sunday for the past 12 years.

They’ve got a local favorite receiver in Mizzou alum Jeremy Maclin, and Jamaal Charles is one of the most exciting backs to carry the football when he’s healthy. But other than that you’re not going to see a lot of shootouts with Alex Smith managing the game. Although he is a definite improvement over Matt Cassel in the putting on hats department.

The Chiefs have been quietly solid since Andy Reid took over winning 11, 9, and 11 games. The problem is the Broncos have been just slightly better each year causing the Chiefs to settle for second 3 years in a row. But maybe with the Broncos possibly turning to Mark Sanchez the Chiefs can pull out a division title.

Chiefs a little too boring for you? Especially after Jamaal Charles gets his yearly season ending and fantasy crushing injury? Why not look east for another team a short 4 hour drive down I-70?

A team that has something the Rams haven’t been able to claim since Marc Bulger hung up the cleats2. A good quarterback.

When he isn’t having his spleen lacerated behind a patchwork offensive line, Andrew Luck is one of the best young QBs in the league. Outside of T.Y. Hilton and Donte Moncrief, Luck doesn’t have a lot of support on the team. But those 3 should at least making for some interesting games within the mediocre AFC South. 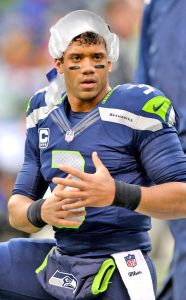 Even though they’ve been your sworn enemy for years you’re now free to jump ship. Hell, you could even make an argument that this is the most American choice. Our country was founded by people jumping ship from a tyrannical, greedy rule.

Go ahead, jump on the 12th man bandwagon3. Even if it’s going to be a little less fun without Marshawn Lynch riding shotgun.

The Seahawks still have a great defense and Russell Wilson is quickly cementing himself as one of the top quarterbacks in the NFL. He’s on track to supplant the Peytons, the Bradys, etc as they continue to go out to pasture.

Of course you’ll have to deal with Pete Carroll chomping on gum and sticking it under all the bandwagon seats, but at least you’ll be rooting for a front runner for a change.

Speaking of frontrunners the Arizona Cardinals are one of the favorites to make a deep playoff run again. As long as they can keep Carson Palmer healthy enough to let the defense and young running backs take over.

In his short time at the helm of the Arizona Cardinals, Bruce Arians has proven to be a great coach and a dead-ringer for the bomb tech in Die Hard: With a Vengeance.

Plus he was kind of the first guy to call out Jeff Fisher and the Rams for being what they are, perennially mediocre.

If you’re young enough to have not been around when the Cardinals left St. Louis this could be the team for you. Though that could definitely be a deal breaker for some.

Maybe you don’t want to hop on a bandwagon that’s out in front. You want the chance to be on the bandwagon that comes up from the rear when no one was expecting it. Maybe the Jaguars are the team for you.

They turned out to be not half bad last year once Blake Bortles came into his own and started developing a connection with receivers Allen Robinson and Allen Hurns.

Where else can you find a team with two prominent wide receivers named Allen?

Fun Fact: They could have been the St. Louis Stallions. But as the NFL is one to do, the rug got pulled out from under St. Louis and the expansion team went to Jacksonville. With the cake ready and everything.

Because screw the NFL. The Birds usually take us deep enough into October to overlap with the Blues season anyway. And they’ve got to be due by now.